It was the Traditional Panel concept that was, in fact, the impetus for us opening an online Orthodox icon store in the first place.  Our desire in this process was to create a reproduction icon that had the “feel” and sense of quality that one experiences when they hold an icon of antiquity or, for that matter, a newly painted icon from Russia today. Of course, we did not know how this product would be received and, to this end, we want to thank our customers sincerely for your overwhelming response to our signature product, the Traditional Panel Icon.  Glory to God!

Photos of our Traditional Panel Icons

Photos of traditional panel icons made in Russia today 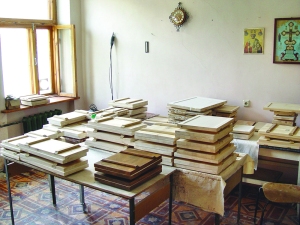 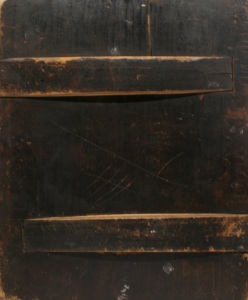 How we make our Tradational Panel icons:

Our signature product, the traditional panel mounted icons, are made with the utmost care.  We begin with carefully selected 4/4 solid poplar.  Then we route dovetailed keyways through the reverse and insert the red oak splines.  This process is to keep the panel from warping over time, the same process as used in hand painted icons throughout antiquity.  We also route coves and chamfers on the splines themselves to create a decorative appeal, in the same fashion that is commonly used in Russia today.

We print our images on the lowest tooth market available canvas with natural pigment based inks.  The prints are then sealed with the highest quality giclee canvas varnish, complete with UV inhibiting properties (will not fade).  For our varnish we use a special mixture which brings out more color than a flat matte, yet still eliminates the glare commonly associated with gloss varnishes.

All our icons are sealed on face, backs, and sides.  We sand out every icon glass smooth to ensure that our customers not only see, but feel the quality of our product.

There are over 25 individual processes which go into every traditional panel icon, each preformed by hand.

Read what our customers say about the Traditional Panel icons:

“Your icons arrived today and are magnificent!  In fact your icons are by far the finest I have ever purchased.  You clearly spend a lot of time selecting quality images, and the care and attention with which you then reproduce them is striking.  Add to that the extraordinary level of craftsmanship that you bring to building the panels and perfecting the mountings, and in total, you’ve produced icons that truly feel alive with presence.  In my opinion these are the finest icons on the market.”  David D.

“This is my first purchase from this company and i can say without reservation this is the finest icon I have!  The craftsmanship is exquisite, the construction, the colors, I am so glad to have found your company.  You have a customer for life!  John D.

“This was my first purchase from OCS, it will  not be my last.  The icon craftsmanship was perfect.  The quality of the traditional panel is the nicest icon that I have.  A beautiful offering of this particular icon indeed.  I can tell that real attention was paid to the final result.  Highly recommended.”  Michael K.

Visit us online for our full image catalog

We hope that you enjoy our new pages. We were able to migrate the primary content from our wordpress blog to our new online store and have added a resources page. We plan to add much more to these new pages in the near future.

Concerning the resource page – if you are an Orthodox craftsman and would like to be featured, contact us.

asking for your prayers. in XC, silouan campbell

Over 2000 images in our online catalog including many rare and hard to find subjects.  If it is not on our website, ask – changes are we can find it.  Come and read our reviews! 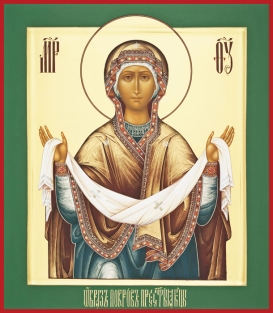 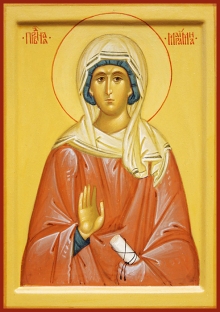 The Life of St. Seraphim (Sulimova) the New Martyr 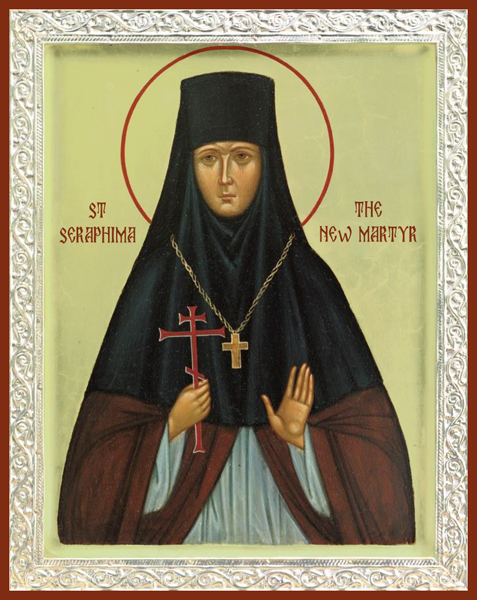 Elizabeth Nikolaevna was born in 1859 in the town of Ustyuzhne in the Cherepovets district of the Novgorod province to Nikolai and Olga Sulimov. Elizabeth was the youngest of six children: Alexy, Tatiana, Natalia, Paraskeva, Eugene, and Elizabeth. The children were educated by their God-loving parents and were taught to read and write in the home. Of the Sulimov’s six children, three chose the monastic path.

When Elizabeth turned 17 she entered the Leushinsky Convent along with her older sister Natalia. She remained “on trial” for seven years and was clothed a novice 1884. Elizabeth performed various chores, but her principal obedience was that of being choir director.   In 1893 Elizabeth, along with her sister Natalia, were transferred to the Leushinsky prodvoria in St. Petersburg. Here Elizabeth became acquainted with the great St. John of Kronstadt who loved to serve in their chapel.

During this time in St. Petersburg a miracle took place with the novice Elizabeth. There had appeared on her right hand a large painful growth and she had to contend with this embarrassment and pain for several years. During the vigil for St. Boniface the Martyr, sister Elizabeth begin to wonder if this great Saint of God would heal her affliction. Coming to herself after thinking and wishing for this healing she put her healthy hand over the sore hand and immediately felt that there was no longer any growth or pain. Realizing that she had been healed, sister Elizabeth extended both arms to the sisters in the choir and exclaimed, “Look, sisters, because I do not have anything on my arm!” Everyone was amazed by this miracle and Elizabeth was grateful to God that he had created this healing through the prayers of the Holy Martyr Boniface.

In 1901 her long awaited tonsure to the little schema finally took place and she was given the name Seraphima, after St. Seraphim of Antioch (the martyr). The following year she returned to the Leushinsky Convent and was appointed treasurer and assistant to the abbess. In 1905 she was sent to perform the post of abbess in the Therapontov Convent and on July 2, 1906 Mother Seraphima was elevated to the official rank of abbess. In addition to her main concerns, Mother Seraphima paid much attention to the education and upbringing of children from the Therapontov region. She established handicraft classes for young women and in 1909 a parish school was built. Peasant children were taught everything necessary in life: reading and writing, handicrafts, church singing and the Law of God. Mother Seraphima contributed as much as she could to charity, supported poor families, homeless women, and tirelessly gave herself away to both the sisters as well as the needy.

The October revolution was the beginning of the destruction of Orthodox Russia. In May the godless authorities begin to make inventory of church property. The Therapontov convent operated as both a monastery and a local parish. To this end, the property was divided into two classifications, parish and monastery. This division meant that in order to take inventory there has to be present the local parish council. The peasants, who comprised this parish council, were aggressive and resistant to the soviet commission who were charged with obtaining this inventory. Only under the persuasion of the local priest Fr. John Ivanov was bloodshed averted between the parish council and the commission.  Two days later Fr. John was arrested by the red army for “inciting” the peasants and at the same time Abbess Seraphima was summoned to the investigative committee. At this time Fr. John was sent to prison and Mother Seraphima was placed under house arrest. After these events the godless authorities entered the Therapontov convent, ransacking its belonging, stealing anything of interest and verbally abusing the sisterhood. With Fr. John imprisoned all services ceased in the convent. The local bishop Barsanuphius (Lebedev), when told about the possibility of the soviets denouncing the convent, said, “I am not afraid of violent death, but I dare not think that the Lord will find me worthy of a martyr’s death.”

On September 15th Vladyka Barsanuphius was arrested and at the same time security was sent to acquire Mother Seraphima. At one o’clock in the morning the abbess was taken to prison and at five o’clock the bishop, abbess and four laymen were led to execution.

The soviets walked the prisoners along the Old Goritsky road and up to Zolotukha Hill where there was a shooting range. Vladyka, looking at the area, said, “This is our Golgotha.” Abbess Seraphima panicked as she thought they were being transported to Cherepovets prison. The Bishop held out his hand, supporting Mother Seraphima, and said, “Mother, cheer up! You are a spiritual person. We have to go to death, not fearing, but like a wedding feast – with joy. There will come a time when we will be envied.” Upon these exhortations from the Bishop, Mother Seraphima regained her composure and walked calmly, with peace of mind, to the place of execution. The soviets made the prisoners turn their backs, but Abbess Seraphima turned around and addressing the executioners said, “Forgive me, the accursed one.” The soviets mistook her words as a curse and they shot the blessed Abbess in the face. At this time they opened fire on all the prisoners and all fell, except for Vladyka Barsanuphius. The Bishop had raised his hands to Heaven and was praying the prayers for the departure for the soul. Only after lowering his hands did any of the bullets hit the Holy Barsanhphius. All six martyrs shared a common grave in the field at Zolotukha Hill. The pious faithful of that era were known to decorate the grave with flowers, while today a small chapel has been built over the location of their martyrdom.

Sts. Barsanuphius and Seraphima, pray to God for us!

visit us online for our full image collection, over 2000 icons! 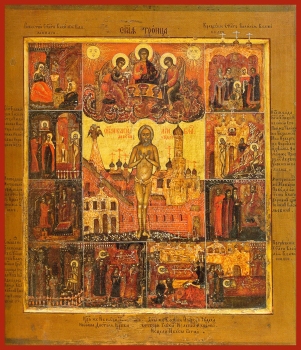 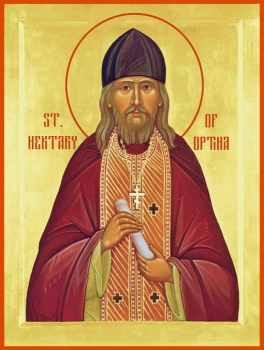 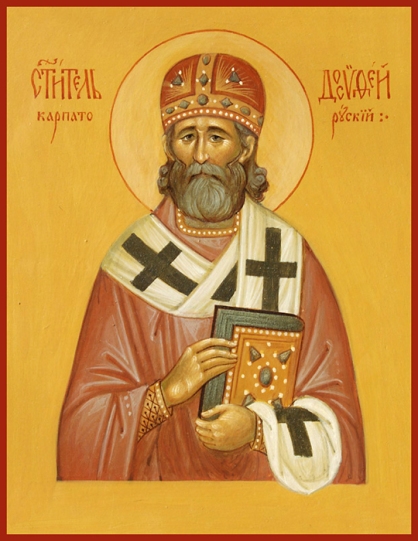 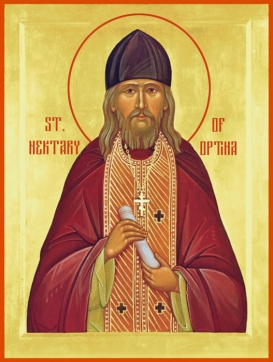 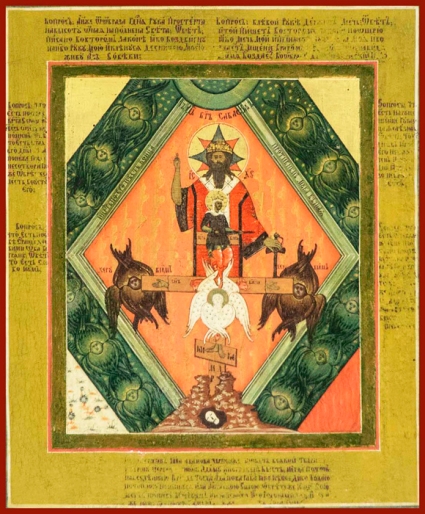 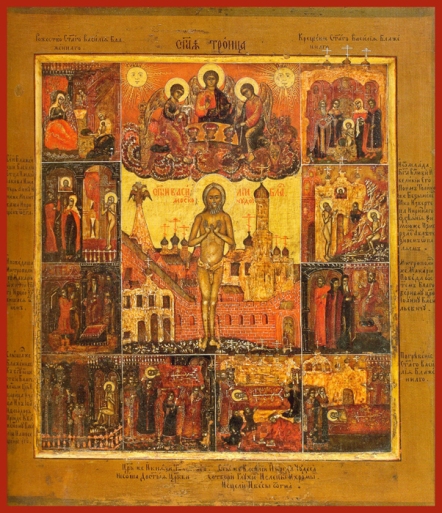 visit us online for our full image collection 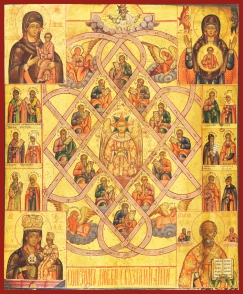 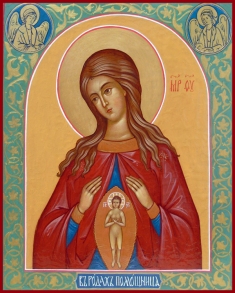 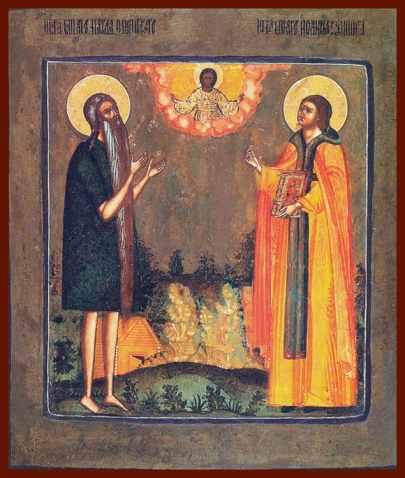 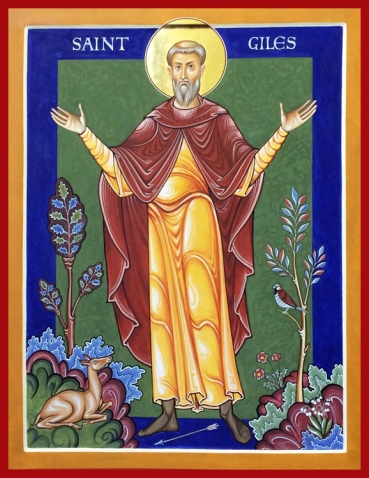 “Silouan’s icons are the real deal. Short of actually commissioning a hand-painted icon for many, many times the price, the icons from OCS are far and away the highest quality icons I have encountered. The workmanship and attention to detail are second to none, and the icons possess a bespoke, handmade quality that I have not seen any other shop replicate. The icons feel (and smell!) like they literally just came out of your grandfather’s woodshop. They are truly special and something to cherish.”

Thank you Ben L. for your kind review.  We are pleased that you are pleased – Slava Bogu!